‘A story has a beginning, a middle and an end,’ said every English teacher ever. Which is good advice -unless the story has two beginnings, as this one does.

The first beginning of this story occurred in late 2013. My then employer M&S announced their participation in ‘Cycle to Work’, a government-endorsed tax dodge that allows employees to procure bicycles with a tax-free loan from their company, to be repaid over the coming year.

The specifics of the scheme are helpfully vague, in that they don’t actually verify whether you intend to cycle to work or not. Had they done, they would have discovered that my cycling route to the office would involve over 30 miles of 3-lane bumper-to-bumper commuter traffic on the A1 into Central London. But despite never actually planning to do as the scheme recommends, I’m a real sucker for a bargain, so I took advantage nonetheless.

Never ones to turn down the opportunity for a ‘bike perv’ session, my buddies Scotty and Freya were only too happy to accompany me to Halfords and help me spend my voucher. Soon I had all the gear and no idea – the proud owner of some unflattering lycra, a pump, a helmet, and a Boardman CX bike. I named her Winona – because what would I do? Ryder.

At this stage, my plan to ‘get into cycling’ was sketchy at best, although the nugget of an idea was forming – how about cycling from home to Africa? The trick is that the African continent lies only a few nautical miles from Southern Europe, so really the cycle would ‘only’ be through France and Spain, then over to Morocco – although ‘to Africa’ sounds way more impressive, so of course this is how I shall continue to describe it. Since 2007 I have sat on the board of a charity operating in Zambia called Umutima – and although Morocco is obviously a very different version of ‘Africa’ to Zambia, the challenge of reaching the continent felt like it had a nice connection.

One lunchtime I mooted my plans to my Head of Department and friend, the legendary Benjy Meyer. Benjy humoured me by opening Googlemaps as a visual aid, and performing ‘active listening’, but that is about as far as the planning got, until…

The second beginning happened on the second Sunday of January 2016. Inspired by the unseasonably warm weather, my friends Cath and Charlie Makin were heading out of London for a countryside ramble and wondered if any Hertfordshire bumpkins wanted to join them.

As it happened, I was thinking about a bike ride that very day, so this was a good excuse to kill a few birds with one stone. For a few months before, I had been thinking about resurrecting my Morocco plan in 2016. So as Winona looked on from her corner of the living room – where she had been sitting, inert and housebound for a number of years – I contemplated The Cycle to Africa. Naturally I had some reservations, but employed the tried and tested method, pros and cons.

As is evident, the pros outweigh the cons, and that was that. Game on.

I arranged to meet Cat and Charlie at The Candlestick pub about 8 miles away. My trusty steed and I would have made good time, had Googlemaps not lured us along a swamp-like bridleway. I persevered for about 500 metres, but anxious not to turn up at a respectable country pub looking like a bog snorkeler, backed out in favour of a more conventional route.

Clad in their matching black and purple outdoorwear, I was greeted by the Makins. Historically, they been very supportive of my endeavours – they joined me on a trip to Kilimanjaro, have invited me to join them on various runs, and Cat formed one half of our victorious Braughing Wheelbarrow Race 2015 partnership. 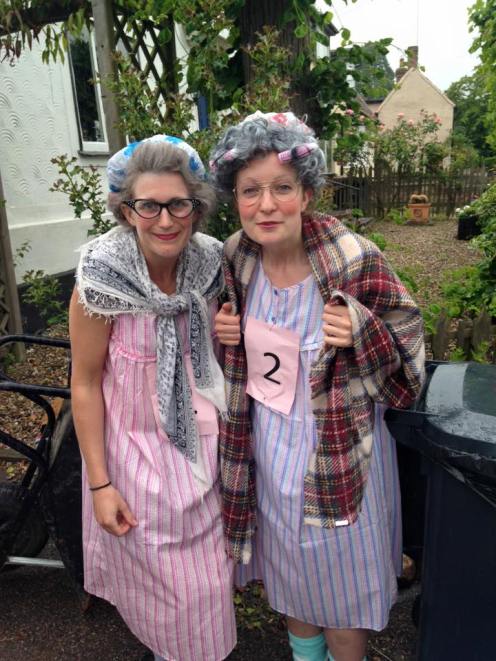 Before the Braughing Wheelbarrow Race 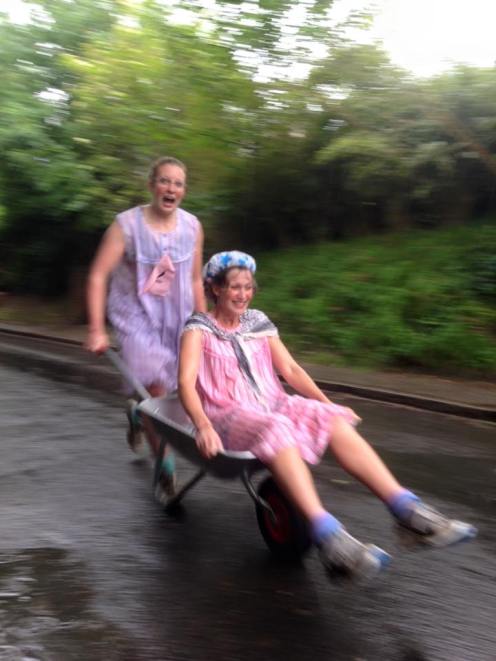 Leading the pack at the Braughing Wheelbarrow Race 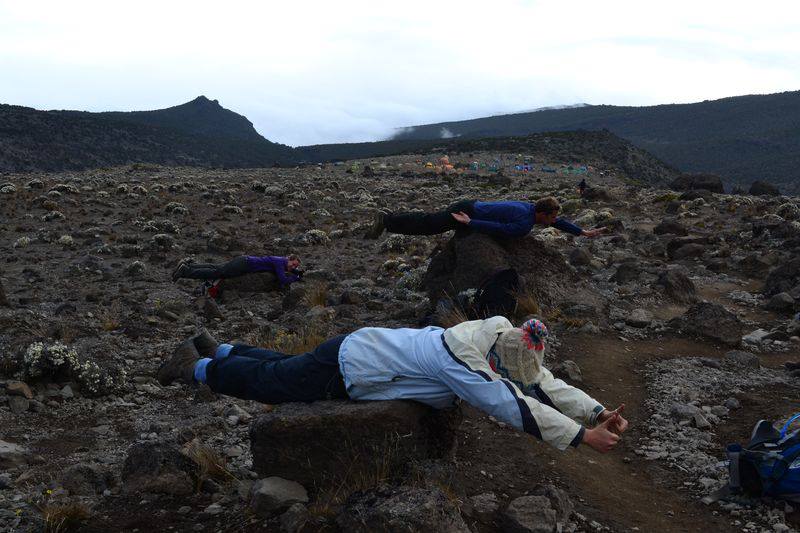 To my knowledge, the only photograph that exists of just the 3 of us – planking on Kili!

A very sporty couple, last year Charlie cycled the 100-mile Ride London, and Catherine once entered a sprint triathlon. This makes them very well qualified to offer cycling advice – which they did, unreservedly.

Outside the pub, Cat and Charlie rapidly set about skewing the careful balance of my pros and cons list. Many more cons were piled on, in quick succession:

‘Do you have panniers yet? You will need a water bottle cage, too. And where is your puncture repair kit? The height of your saddle looks too low – think of your knees. If you change your tyres to slicks, you’ll be much faster’

(I contemplated defending my sturdy fat Cyclocross tyres, which were absolutely the only thing that had stopped me flying into the quagmire just a few minutes before – but wasn’t able to find a sufficient break in conversation)

‘How about your training plan, how will you train? And what about lights?’ they challenged, ‘Do you have those?’

‘Well, no,’ I responded, ‘but I just won’t cycle at night…it’s quite light in summer, you know’.

‘But what if you have to?’ chimed the Makins in unison, before one of them added ‘we don’t want to rain on your parade – we just want to help you get there’.

I took all the above advice (and more) on board in good grace – after all, I need all the help I can get. And with friends like these, what could possibly go wrong?

So, those were the beginnings of this story! In the coming months, keep an eye out for a middle and an end.