3 days, and around 300km in. I wouldn’t exactly say ‘so far, so good’ but I can’t really complain as I brought it all on myself!

Although I’d originally planned to cycle down through the UK, when I unexpectedly obtained Eurovision tickets it meant there wouldn’t be enough time. As I’d already booked things up, my long-suffering parents were lovely enough to drive Winona and I down to Portsmouth, stuff me with pasta and deposit us at the 22.45 ferry to Caen.

It was very odd wheeling a bike onto the boat amongst the lorries! It’s called an ‘overnight’ crossing, but this makes it sound quite relaxing. However, trying to sleep in a chair on a 7 hour journey with lots of other banging, shouting, clattering, rustling, snoring passengers is neither a restful nor long night!

In the morning, disaster struck. I’d partly charged my phone in a socket near my seat when we’d set off, and when I ‘got up’ in the morning (as I was sitting upright in a chair, all this involved was flipping up my eyemask) I decided to give it another boost for max sat-nav power. To my utter horror, it displayed the following message and refused to charge:

This has never happened before! So much rested on the phone – and for some reason, now it was telling me this wasn’t a genuine Apple cable (it was) and refusing to charge! In my irrational sleep deprived state, I genuinely considered just staying on board and heading back to the UK.

My one ray of hope was a spare cable in my panniers – and thank goodness I put it in at the last minute! Fortunately, once I got down to the hold to check, it worked fine. Phew!

Panic over, day 1 started with some amusing honesty from the French border guards:

The ride from the ferry terminal to Gacé, did a lot to assuage some of my worries about the trip – yet created a few more! On the positive side:

1. Ahead of the trip, I was really concerned about navigation. Thanks to the killer combo of the fantastic French road network and my phone (now accepting charge), so far I’ve had zero issues.

2. I was also worried about being able to obtain enough ‘good’ fuel en route (rather than just bread). Again – this was very silly of me, the Frogs eat the best of anyone in the world. If anything I’ve been too full, thanks to not only the generosity of my hosts, but Good Samaritans too. Even when I left Winona propped outside a roadside cafe, a very sweet trucker or two left me these offerings:

3. I haven’t been murdered. Slightly controversially – I’ve been staying in the homes of complete strangers. ‘Warm Showers’ is a network of cycle enthusiasts who welcome other cyclists into their homes – a bit like a free Airbnb, but without the same regulation. Mercifully, my hosts so far have been absolutely incredible.

So with these 3 major worries in check, plain sailing, right? Nup! Firstly, the weather has been GRIM – it’s rained on all 3 days, although less so yesterday. And cycling a long way, in the rain, is just not fun. I had set out with visions of sitting sipping coffee in chic bistros on small village squares en route, but due to the weather, I’ve mainly been huddled, shivering in wherever I can find, or just ploughing on.

Secondly, injury. I did quite a lot of training, and aside from aching legs and backside, didn’t even contemplate anything beyond that. About 60km in on day 1, I was a bit slow to release my cleat, and landed awkwardly on my left leg. This wasn’t helped by the weight of the panniers, which caused the bike to twist round onto me…and bam, twisted knee.

It got progressively worse, so much so that I resorted to pedalling pretty much one legged and snivelling for the rest of the day – although due to the rain my face couldn’t get much wetter! It still hurts every pedal, but has been less acute the past 2 days. In doing this, I’m apparently risking what my physioterrorist sister Anna has described as ‘microtrauma’, which doesn’t sound appealing, but must be better than macrotrauma?

So needless to say, day 1 was fairly miserable. I wheeled up into town at 3.30pm, for the first time truly understanding the phrase ‘soaked through’, and the only place open (at least, that I could see through the sheet rain) was a bookies. So in I squelched, wrapped myself in a towel, ordered a hot drink and contemplated how much a taxi home might be. Do they have Uber in tiny French towns yet? Not sure if it was too early to turn up at my ‘Warm Showers’ hosts, I called Madame Taupin.

My goodness, am I glad I did! Isabelle and Jean-Yves were so lovely and hospitable. Isabelle said I was welcome to come right away, and set out on her bike to retrieve me, soggy and shivering, and led me back to their beautiful house. They could not have been kinder, and after a shower I felt much more positive. They shared a delicious 4-course dinner with me, gave me ibuprofen gel and a train timetable in case I needed it if the knee hurt too much the next day.

My A-Level French allowed me to hold a stilted franglais conversation for a good few hours. On thanking them again for their kindness, they explained that their own daughter uses Warm Showers, so they hope that by doing their bit, she will receive kindness from strangers too. Utter legends!

It’s amazing how much a good night’s sleep and a feed can add perspective. Although the sun wasn’t exactly shining, yesterday morning I set out for Le Mans in more favourable conditions, and with a full stomach. The 120km was tough, especially as the flat lands of Normandy started to roll into more and more hills. The knee was still giving me a lot of gip, but I made it to Marion and Damien’s place – here they are: 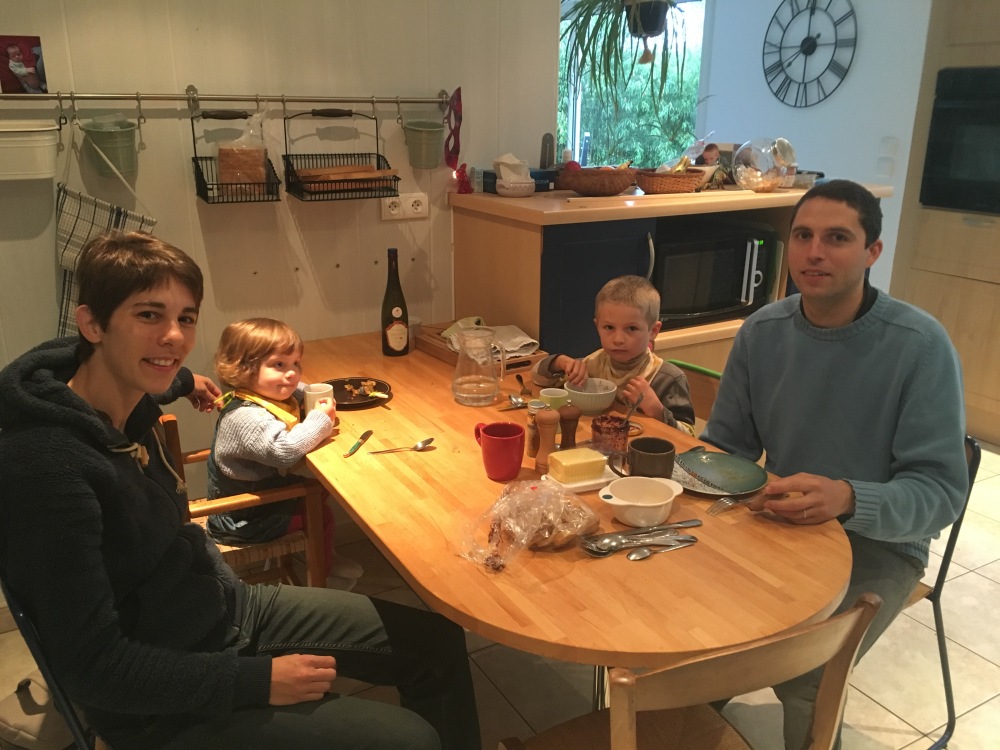 Again, faultless hosts. So kind and hospitable, helped me make some adjustments on my bike, advised on my route, fed me a delicious dinner, and their little ones were super cute too.

More cycling today, more hills, more rain, more knee pain. I hope it’s getting better, but I think there’s only so long I can sensibly ‘ignore’ it without causing real damage, so here’s hoping it repairs itself! A bit shorter today – ‘only’ about 55 miles, so I’ve had a free afternoon. Firstly, I did some washing. I seem to have acquired a lot of filth on my clothing:

And then a little wander around Tours when it had stopped raining, which is a beautiful little place.

I’m staying with an Airbnb host here, Francoise – she’s also really lovely and speaks great English, so less of my mental energy is required to converse! Judging on this hotel I saw in Tours, I’m glad I went with Airbnb! 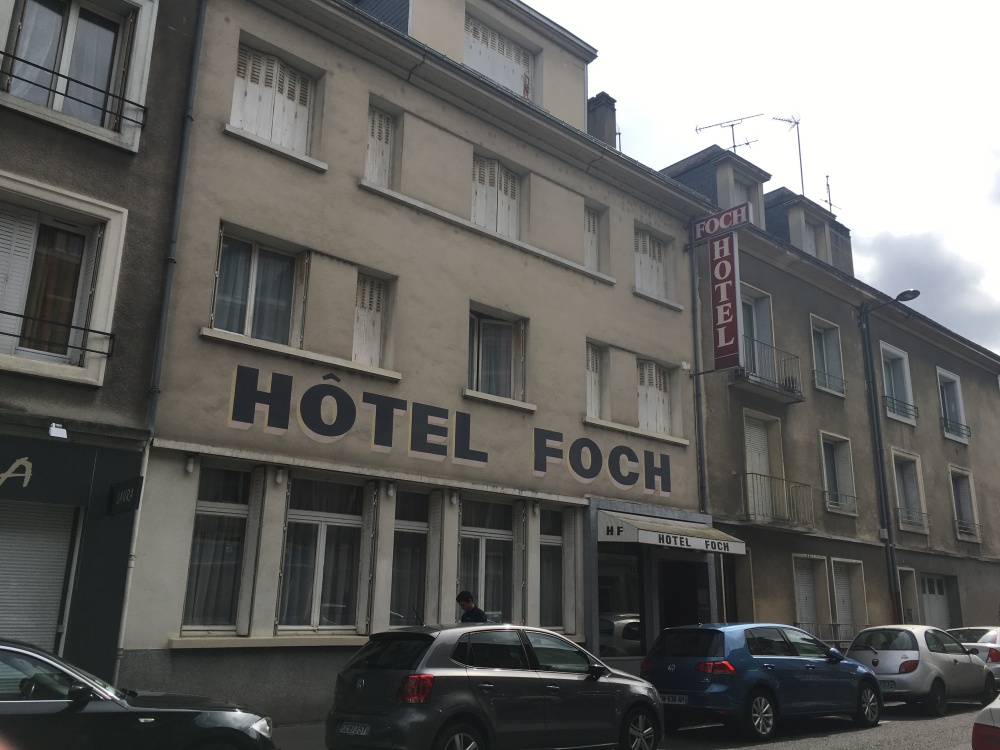 Thanks for reading, over and out. Next stop, Poitiers