Thanks to a bit of research on the rules of carriage on French public transport, I knew that the leg between Tours and Poitiers on Saturday would be my only opportunity for the next two days to ‘let the train take the strain,’ as my cheesy father would say. Evicted from the Airbnb at 7am because Françoise ‘had a baptism to attend’ (at 7am? On a Saturday?), I had the opportunity to see some great early-morning Loire Valley scenery.

I made reasonable progress over 80km (at least, as reasonable as one can make with a gammy knee and weighty panniers), but a storm then started brewing. Although curious as to which type of superpower getting struck by lightning would grant me, I was close to a station, and ducking out of the storm and onto the train for the last 30km seemed much more sensible – not least to give me a chance to rest my knee and conserve the legs with two very long days of cycling approaching.

My friend Lottie (but, like me, you might prefer to call her Grotty Lottie, or GroLo for short), has previously impressed me with her insightful observations on the concept she refers to as ‘unhelpful helping’ which I wish to expand upon. This is a situation that occurs quite often, when someone has the best intentions to be helpful, but doesn’t possess the necessary knowledge and/or skills to do so.

An unfamiliar kitchen is a prime hotspot for unhelpful helping. For instance – you may be feeling helpful and offer to unload a friend’s dishwasher. But you don’t know where anything goes. So you normally end up ‘unhelpfully helping’ in one of the following ways:

a) Asking your host where every single item goes. Result = irritated host because it takes longer for them to describe and gesture towards each location than it would be to just do the job themselves.
b) Opening multiple cupboards and going with your best guess based on your own kitchen – but everything has its place, and often the result is your host having to follow you around rearranging everything you have unhelpfully helped to put in the wrong place
c) Laying items out on the worktop – which is a waste of time, as your hosts will still have to put things away themselves, and the items are only marginally more accessible on the worktops than straight out of the dishwasher.

But at least you tried to help, eh?

So where is this ramble going? Well, back to the train station. Here, I was on the receiving end of a classic case of unhelpful helping. Two things should have warned me off asking the couple in question for any advice whatsoever: she very obviously had no bra on, and he had long hair (and very few teeth). As a strict life policy, I am always deeply suspicious of both men with long hair, and braless women. Take Lawrence Llewelyn-Bowen and Charlie Dimmock as well-known examples. Would you let these people near your home and garden? No. To me, both categories of person are never to be trusted, and the toothlessness should have further heightened my distrust.

But alas, I was a bit tired and groggy from cycling, so I broke policy. I simply wanted to know if I could buy a ticket on the train. The couple gabbled away for some time, and then took it upon themselves to unhelpfully help me try and obtain a ticket from the machine. Being more technologically literate than the both of them combined, I was more than capable of using the machine – I just couldn’t be bothered to walk up the platform to do it, hence my question. But they insisted. Then ensued a massive pantomime where it became glaringly apparent that neither even knew how to use a ticket machine, so they resorted to very slowly reading out every single word on the screen, and pointing at the various features.

When they tried to force my bank card into the ticket printing slot, I became much less compliant and quickly made up an excuse about being worried my English card might get swallowed in the foreign machine, and that I would buy a ticket on the train MERCIBEAUCOUP. Which had been the plan all along. It cost me €5 more, but this was a small price to pay for escaping The Unhelpful Couple.

And the weirdest thing? TUC didn’t even get onto the train when it came…and the next one wasn’t for 3 hours! Obviously my unexpected appearance at a rural train station and consequent opportunity to terrorise me with unhelpful helpfulness was their idea of a successful Saturday afternoon’s entertainment.

Arriving in Poitiers, outrunning the storm by an hour or so I had time to relax with a beer (OK, two) before arriving at my hosts.

Céline and Yannick were a couple with a 2-month old baby. They lived in a bit of a hippy houseshare, but they were really friendly I was very glad for the warm shower and bed for the night. Theirs was a very eco-household, with all sorts of modifications, including this crazy toilet – instead of flushing it, you do what you need to do, and then pour wood chippings on top!

I thought they were getting a bit too environmentally friendly when they asked me to ‘rape the carrot.’ Fortunately I quickly deduced that the French verb ‘raper’ means ‘to grate’ before things got too out of hand.

I knew that today was shaping up to be a toughie…long mileage, a hideous weather forecast and a tricky route. When there are no obvious ‘named’ D or C roads to follow, it’s incredibly slow and battery-hungry trying to navigate through small villages on tiny tracks. The compound effect of all this stop-starting and lost momentum really adds up. With this in mind, I set out at 6.30am towards Angouleme, 125km south.

Less than 3 rainy hours in, disaster struck! I’d innocently followed what Googlemaps seemed to show to be a small road. It was. But then it turned into a dirt track, then a footpath. And I really don’t have the set-up to contend with waterlogged muddy trails!

When it got a bit wider I cycled again, but my back wheel skidded out, so I reverted to trying to wheel her again until the ‘real’ road. But actually – the back wheel was not rolling at all! I investigated, and the pannier rack is badly twisted and detached on one side, and missing a screw. It had slipped down and was locked into the wheel. You can’t see very well, but the black bit should be flush: 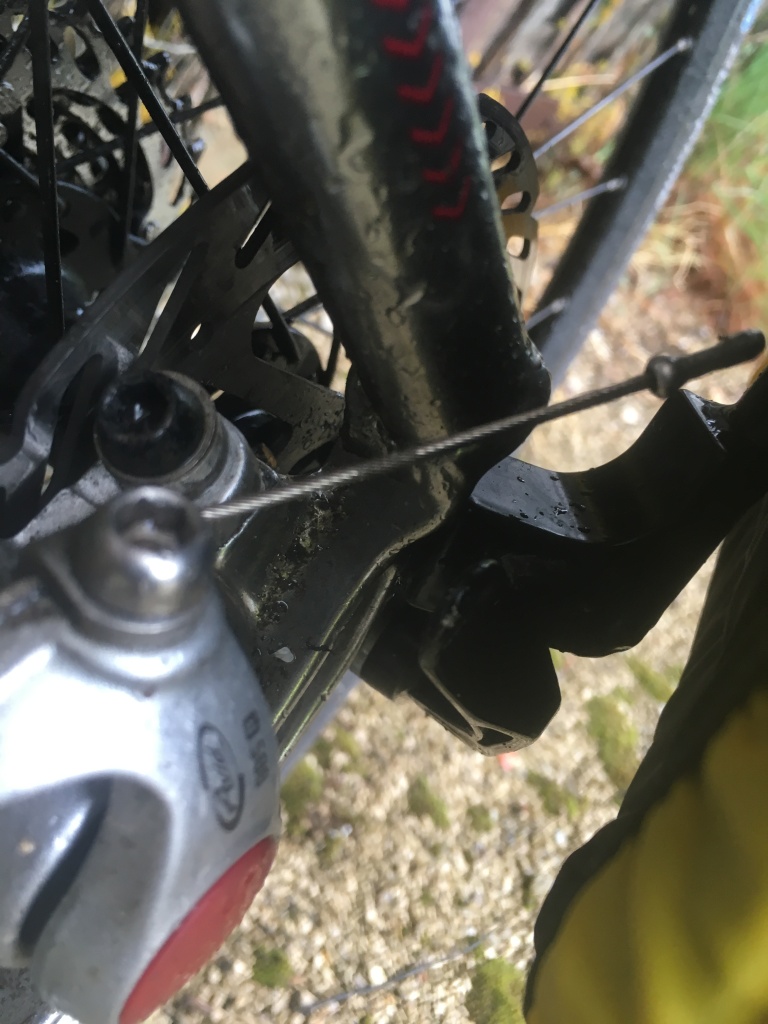 I swore a little bit.

I’m not sure if it happened just then, or had been working loose for a while. Irrelevant really – all I could do was to effect some kind of repair by wedging it up onto the wheel mount and using a convoluted bungee cord arrangement.

The day’s emergency Mars bar was consumed at a record-breaking 9.24am, and all I could do was press on, even more slowly and carefully (which admittedly did benefit the knee). I am so fortunate that this happened on a small deserted track and I wasn’t thrown into any oncoming traffic. This in mind, I spent the rest of the day well aware that the rack could dislodge and block the wheel again, causing irreparable damage to the wheel, spokes, chain, brake discs…or me! Thankfully it didn’t.

Needless to say, progress was even slower…dodgy bike, rain, and wind so strong I was nearly blown over. Yuck. I took these whilst parked in a ditch waiting for the rain to ease off: 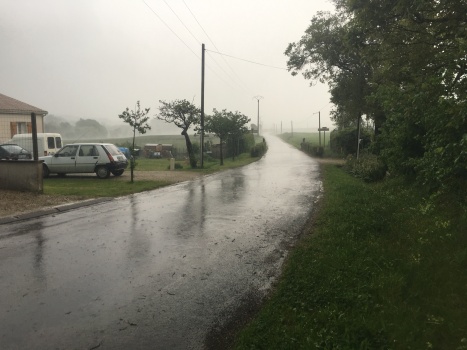 With 30km to go, I stopped and treated myself to a 4-course meal, the idea being that more courses = more time inside to dry out and get more comfortable! As each delicious course arrived, I felt a tiny bit less sorry for myself. I’d heard that the area was popular with British ex-pats, so I was straining to hear a familiar accent and conspicuously had my Union Jack phone cover in full view on the table – but alas, no kindly soul to beg into driving me the next 2 and a bit hours!

Fortunately after lunch was less eventful – the weather finally eased and it was much more straightforward to navigate. My gears did stop shifting to the big cog, but this isn’t so much of an issue given that I already have to find a repair shop tomorrow anyway. Aim is to get everything repaired in the morning, then modify the plan and get back on track in the afternoon. Here we go!