Whilst not strictly pedal or paddle related, I thought that I might continue blogging on how the Bexit is going; although I fully intend to keep in touch with lots of you individually (and post loads of photos on Facebook – soz!), due to the time difference I think writing on here will be an efficient way to communicate updates, anecdotes and general nonsense.

Some background to Bexit – for a number of years I have wanted to experience a stint working abroad, but with the exception of India 2010 with Tesco, I sadly haven’t been able to manoeuvre myself into a position with any of my previous companies to make it happen. Although being seconded abroad in a secure job is by far the most preferable option, with time a-ticking I decided to go for a different approach. At the age of 30, it was my last chance to apply for a ‘Working Holiday’ visa before old age sets it, so when I obtained a coveted Canadian visa, I thought I should at least give it a whirl.

It was a pretty difficult concept for people to get their heads around. Most conversations went along these lines:

In actual fact, it didn’t make much sense to me to be leaving work, either. Normally when people leave their jobs, it’s because they hate it so much it becomes unbearable, or they’ve got a better job offer lined up. In my case, neither was true! I delayed leaving for nearly a year to continue working there, and stash some savings away. But the time came when it was now or never, so with some apprehension I wound up my job and made preparations to leave.

In my final months in the UK, when I wasn’t away pedalling and paddling I spent a lot of time with friends and family – and I know that I’m going to miss you all loads! Following weeks of goodbyes, and a few more drinks than the recommended weekly allowance, it was time. I had managed to offload many of my possessions (thanks parentals and Scotty for the storage facilities!), sell my car and rent my house, so with the exception of 55 backbreaking kilograms of luggage, I arrived in Vancouver a free agent, having shed many of the trappings of being a functioning ‘grown up’.

And whilst strangely liberating, it also felt VERY WEIRD. 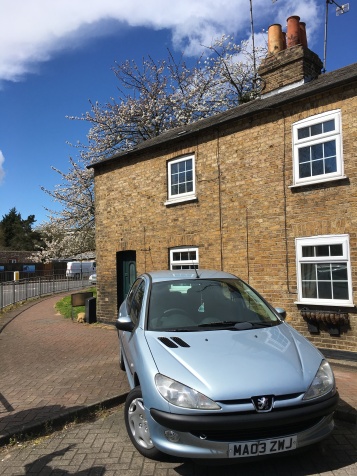 I rented the house and sold the car

Downsizing – from house and car, to 2 suitcases

I HAVE RUINED MY LIFE!

I’m lucky that I naturally have a very economical approach to emotional turmoil. Typically, any (very rare) freak-outs that I experience only last for about 10 seconds, before ceding to my rational, pragmatic default. Two such moments (pictured) occurred in my first couple of days here, though – short, sharp realisations when I vividly remember thinking:

‘OH MY GOODNESS WHAT ON EARTH AM I DOING HERE I HAVE TOTALLY RUINED MY VERY LOVELY LITTLE LIFE IN THE UK AND COME HERE, AND FOR WHAT, FOR WHAAAAAT?!’.

The first was on the flight over – partly because we were delayed on the runway for nearly 2 hours, when the north-eastern tip of Canada came into view, it felt like I had been on the flight FOREVER. Yet this wasn’t even half way to Vancouver – and I realised just how far, far away this place is.My second was on my first morning here. I’d woken ridiculously early with jetlag, was groggy, so decided to go for a run. I ran along the sea wall, it was cold, raining, miserable and awful (on reflection, it was awful because I am very unfit). As I looked out to sea I was thinking ‘what is so great about this place – why do people rave about it so much? It’s just like a wet weekend in Bognor Regis. I think it’s been misrepresented by some big tourism conspiracy!’ Fortunately, rather than fling myself over the seawall and into Davy Jones’ locker, instead I thought – Vancouver, I shall give you a chance. So I ran back to the B&B, took a shower and got on with discovering that I have most certainly NOT been mis-sold. 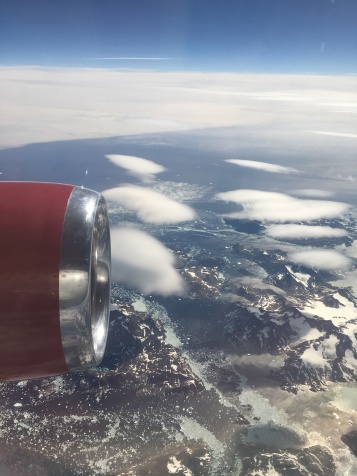 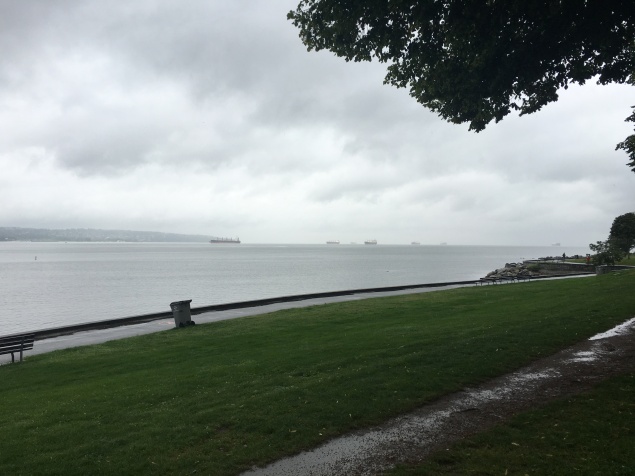 My Bexit came a day before Brexit, and undoubtedly this also precipitated a bit of concern for my financial wellbeing! Being -8 hours from GMT, I was able to monitor the unfolding situation ( / disaster) at a civil hour over a couple of beers. I’d got chatting to an Irish guy, who had worked all over the world in property development. Despite now living back in Dublin, he told me how he keeps all of his amassed savings in sterling, due, he said, to the stability of the pound. He seemed rather proud and self-assured, explaining to me just how incredibly financially savvy he was. With impeccable timing, cue the Brexit votes rolling in! As the evening progressed, we watched with horror as the pound tanked; at one point about halfway through the downward spiral, we even dashed out to an ATM to panic-withdraw cash before the exchange rate weakened even more! This is a story which I will find amusing in few years’ time, or when the pound recovers, but for now, my savings are worth 15-20% less than they were when I moved here so I’m not laughing just yet.

This also meant that the pressure was on, and I needed to find a job 15-20% sooner than planned! I’d already scheduled a 2 week holiday in the Yukon until mid-July, and hadn’t really anticipated job-hunting before that. Spooked by the exchange rate, on my second morning here I started half-heartedly browsing job openings, and didn’t find a single one that I liked the look of. Eeeeeek.

I was spending that day with Johan; when I was at M&S, I was managing a couple of projects with a digital agency in Amsterdam, and Johan was my counterpart Project Manager over there. We spoke and/or emailed every day for around 2 years, met a few times in person and despite several disagreements (pretty much always the fault of myself or M&S!), we generally got on very well. Johan, who has been backpacking around the world for the last year, was ending his trip in Canada. Somehow the stars aligned, and we got to spend a few days together, which consisted mainly of catching up, hiking, eating meat and making bad jokes about computer generated imagery and IT projects.

Hiking with the leggy Dutchman

Anyway, telling Johan about my failed jobhunt that morning I melodramatically moaned that I was probably going to end up washing dishes, quite literally throwing my years of education and experience down the drain. Fortunately, he was on hand to be very Dutch and laid back about the whole situation, telling me ‘don’t be silly, it’s only your first day!’ I responded ‘yeah, but I’m just quite an impatient person!’ to which he gave me a tortured look and, alluding to our time working together, responded ‘yes, Becky. I KNOW.’ Touché, Johan, sorry ’bout that!

Yukon have lots of fun here

So, the very impatient unemployed project manager then took a trip to the far North of Canada, to the Yukon Territory and Alaska. I exchanged one Dutchie for another; my travel companion up there was Erik, who I’d met running a marathon in Greenland a couple of years ago. I was also fortunate enough to sit next to a fab couple, Karen and Bruce, on the flight up to Whitehorse. We chatted non-stop for 2.5 hours – Karen is the Director of Sports and Recreation in The Yukon, and Bruce is a High School Vice Principal specialising in PE – so we talked a lot about sport! These two are absolute gems. Since our initial meeting, I’ve seen them 3 times, both in the Yukon and Vancouver, met their sons and have also somehow wormed my way into joining their daughter’s relay team for the Klondike road race in September, which is an overnight team running event.

Erik and I had a great time up North, seeing some stunning mountains, taking some hikes, soaking up the history of the gold rush in the late 1890s, and driving A LOT. We hired a car to get around, and were given a free upgrade from the smallest, cheapest little rollerskate to an absolute gas-guzzling beast. This truck wouldn’t even fit down most streets in the UK or Holland, and driving it was like captaining a large container ship. Despite this, I was fortunate to be able to drive at all, having carelessly left my driving licence in my parents’ scanner. I explained to the rental guy that although I couldn’t provide him with the licence itself, I did have photograph of it – would that do? The usual stringent car hire process seems to be more relaxed in the Yukon – he just took my mobile with the image on-screen, and photocopied the whole phone?! Mercifully, we didn’t get pulled over by the police or questioned by the American border guards. 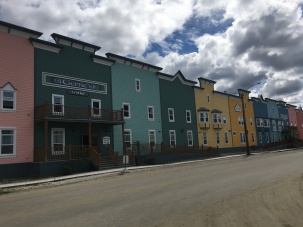 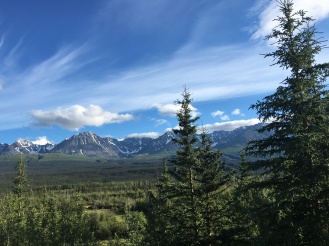 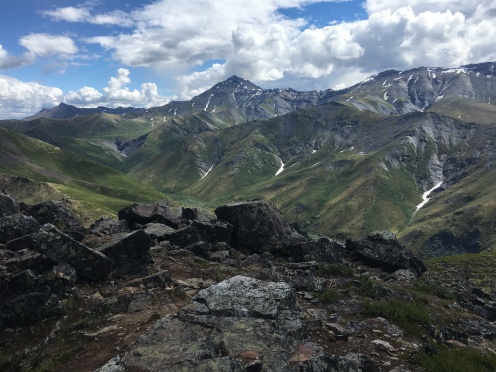 Our beast of a car
We also went on a 3-day camping and canoeing trip in the wilderness (there you go, a tenuous link to paddling). It was a great experience, particularly as we spotted a grizzly bear – a real treat. The trip was partially educational, in that our guide Fabian made some attempts to teach us wilderness survival skills. It soon became apparent that there is no way I would survive – I can’t even light a campfire unless I use a fluffed-up tampon as kindling! Resourceful, sure, but not always readily available miles from civilisation, and thus not a survival strategy to be relied upon. 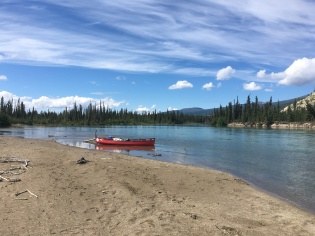 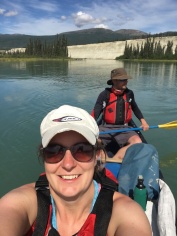 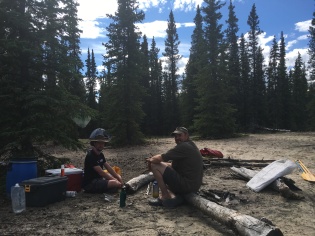 After a fun couple of weeks in the Yukon, it was back to Vancouver. And here I am – very nearly a fully functioning Vancouverite. Within a week it’s all fallen into place nicely, in that I’m no longer unemployed nor homeless.

Quicker than I ever dared hope, I’m so fortunate to have been offered a PM job in a digital agency in Downtown, and I’ve moved in to an apartment room just a block from the beach in the Kitsilano neighbourhood. I am definitely not cool enough to be living this kind of lifestyle, and although it may unravel at any time, for the moment I intend to enjoy it while it lasts!

Also, having said that I didn’t really know anyone in Vancouver very well, three ladies have been absolutely incredible in helping me settle in here. Meghan (Oxford Cricket), Fran (Trevs Netball – along with her boyfriend Ant) and Olivia (Harrods) have been so kind and welcoming, and I definitely wouldn’t have had such a positive start here without them.

Fran, Ant and Alessia
I’m trying to make the most of my last week of freedom by exploring Vancouver and surrounding areas, which has included straying onto a nudist beach. Last night, I joined Fran and Ant (we were all fully clothed) to watch the local ‘soccer’ team, Vancouver Whitecaps, take on the visiting Crystal Palace team. The Canadians, so renowned for their politeness, crushed this stereotype when the Palace line-up was being unveiled. After each player name was announced over the tannoy, the whole crowd appeared to ‘welcome’ that player by loudly shouting ‘W*NKER!’ Quite an unexpected cultural experience!

In summary – come and visit me, it’s great here! Just remember not to be insulted if you introduce yourself to a Whitecaps fan – it’s all in jest (I think). 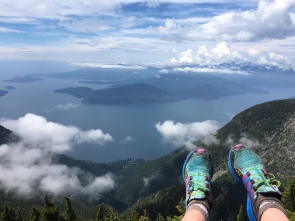 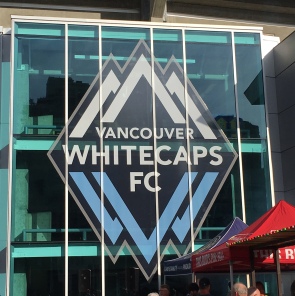 ‘White is the color, Soccer is the game’. WHITECAPS!

‘White is the color, Soccer is the game’. WHITECAPS!